“There is something terribly wrong with a culture inebriated by noise and gregariousness.”

These words from George Steiner, a leading, French-born American literary critic, struck me as perfectly fitting for how we live today. Or don’t.

We live in chaotic times that ceaselessly demand our attention in a variety of ways. We’re bombarded by 24-hour news and opinion, delivered by rival outlets, whose commentators work to out-talk, if not out-shout, one another, hoping to hold our attention for as long as possible. We’re seduced by numerous streaming channels that make it easy to binge-watch all manner of shows without interruption. We’re lured onto social media platforms that find innumerable ways to keep our eyes glued to our phones. We’re stuck. I read an article recently by Douglas Christie, a professor at Loyola Marymount University in Los Angeles, who studies the impact of silence and contemplation on people. When it comes to silence, Christie argues that most of us probably know the brittle, awkward kind of silence that comes up between two people after an argument. But what he’s getting at when he refers to silence, is a kind of patient attention, a receptivity that might emerge if we could simply shut up for five minutes, if we could resist the urge to fill every space with the sounds of me …

Silence isn’t social. That is, it doesn’t fit into the world of social media, which demands constant verbal as well as visual stimulation. Silence opens space for us to get to know ourselves beyond the labels we rely on to define who we are. What social media does, is cut us off from ourselves, reinforcing our attachment to those insidious labels, which put us into the pigeonholes we call identity.

Professor Christie continues by saying that anyone who tries to enter into a space of silence — meditation, sitting alone in a room, walking down a deserted path — can testify that when you begin, you soon find you’re out of your depth. You want something to happen and happen, quickly. The silence is all around you yet you can’t seem to get into it. You’re unaccustomed to silence and that’s uncomfortable. You miss the noise, which allows you to not think. Maybe even, not feel. Christie writes that the only thing to do is stay with it. 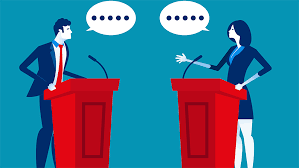 Perhaps, the chaos we live in today is the result of no one hearing anyone anymore, except themselves and others whose labels make them acceptable. We debate endlessly about who’s right and wrong in terms of politics and culture. Yet, debate is often tedious because positions are already settled and nothing is going to change. The antidote to debate is dialogue, which is exploratory, provisional, give and take, opening us to new possibilities.

Dialogue begins with silence, space in which we can learn to see who we are more clearly and others as well. It also takes courage, since dialogue calls for you to step out of well-established comfort zones, if only for the moment. Practically speaking, you learn nothing when you talk. So, silence becomes a pathway to knowledge. What you do with that knowledge is a separate question. If nothing else, silence makes you smarter.

Not surprisingly, there are countless quotes about silence. Here are five that speak to the wisdom of silence:

“Silence is a source of great strength.” Lao Tzu

“The monotony and solitude of a quiet life stimulates the creative mind.” Albert Einstein

“A fool is known by his speech; and a wise man by silence.” Pythagoras

Finally, there is an expression that silence is the first language of God, words attributed to the sixteenth century Christian mystic, St. John of the Cross. I believe these words are, on some level, true and thus worth contemplating.

Let’s start a dialogue and begin by being silent, together.